Home » Books » Other Duties As Assigned

Other Duties As Assigned - a novel by Jim Kreuch

Other Duties As Assigned is the story of Marty McCallender, a regular guy who just wants to make it through the work day without falling asleep during a meeting. He works in a big company's regional office in a medium-sized city in the high desert of the western United States. One day he hears a rumor that the company is planning for the launch of a new product. Supposedly the preparations for this event have brought the marketing people from the home office to the field office in the town of Arroyo Desperado. Marty's job has occasionally taken him there in the past, and it just so happens that he's been asked to make another trip this week. It seems the company is replacing its electric typewriters with a newfangled device known as a "word processor". Marty is supposed to train the field office staff to use the thing, which could be a challenge as he's never even heard of such a thing. He spends a morning becoming a self-taught "word processing" expert, then has lunch with a coworker who has talked him into trying to find out what exactly is this mysterious new product.

The next morning, Marty loads the "word processor" thing into the trunk of a battleship-gray company car and hits the road. As he drives through the desert on a lonely two-lane highway, he remembers the time he dreamed he saw a flying saucer. He had this dream back when he was a kid. Marty and his buddy were exploring an extinct volcano outside of town when they stopped to rest, both falling asleep. The dream was so vivid that, many years later, he remembers every detail. It was a dream, wasn't it? Marty stops for gas in the small town of Cakeville, named for the fine pastries available at a café that closed down years ago. He strikes up a conversation with the reclusive proprietor of the gas station, who lives up in the hills outside of town. He has built a deck where he sits and watches for UFOs, and invites Marty to come and see it on his way back from Arroyo Desperado.

Back on the highway, Marty remembers the summer after he graduated from high school, when he worked at a resort in the Rocky Mountains. He remembers a girl he became friends with and the night they sat around a campfire and heard a tall tale about a flying saucer. It was just a tall tale, wasn't it? When he reaches Arroyo Desperado, there's not much to be found out. The marketing types arrived in a small charter plane, picked up the manager and left. Back home, Marty is soon asked to make another trip to the field office. He's been told a Miss Green has asked for him specifically to assist in standardizing the office's product ordering and inventory systems. Who is this Miss Green?

Read Chapter One For Free


About the cover photo: I took this back in 1983 while on a business trip for USF&G. I was traveling north on Highway 666 (or "Triple Six" as the locals called it) just south of Shiprock, New Mexico. Since then the road was renumbered. I scanned the 3.5"x5.0" print and sent it to Todd Engel for the cover design. 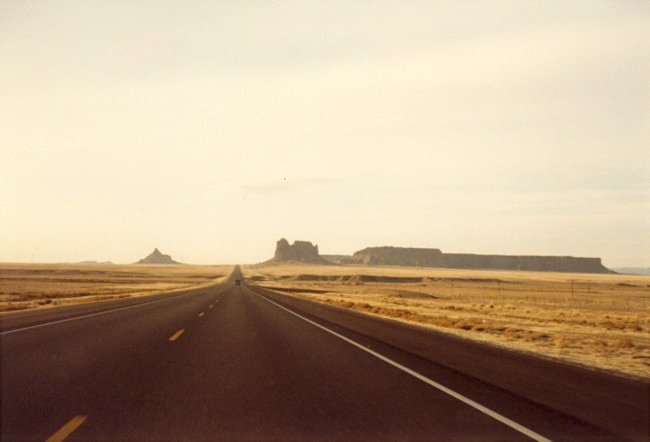 The real Mac's: Mac's La Sierra Coffee Shop is located at 6217 W. Central Avenue in Albuquerque, New Mexico. I remember going out to dinner there when I was a kid, well over fifty years ago. As far as I can tell, they opened in the 1950's - and the place hasn't changed a bit! If you can't decide between the house specialty steak fingers and the excellent Mexican food, there's a combo steak-and-enchilada plate.

Home » Books » Other Duties As Assigned
Top of Page